Citizens’ Assembly on Climate: Focus on what is happening in France

Since October 04th, 2019, a Citizens’ Convention on Climate is taking place in France. Its members have until April 2020 to answer one question: « How to reduce greenhouse gas emissions by at least 40% by 2030, in a spirit of social justice? »

After the “yellow vests” protests that began at the end of 2018, calling for a fairer ecological transition and more citizen participation, the French government has committed to giving a voice to citizens in the law-making process. In this way, EUR 4 million are invested in the organization of this Citizens’ Convention on Climate (CCC). It is an unprecedented democratic experiment in France

Divided into 5 working groups: 1) to eat, 2) to be housed, 3) to consume, 4) to move and 5) to work/produce, the CCC’s members are informed by a range of experts to prepare draft laws on the relevant areas for climate change mitigation. Their mandate is to convert the target of net-zero greenhouse gas emissions (compared to 1990) by 2050 into a series of more concrete aims and measures to put in place during the current decade.

The CCC brings together 150 people, selected at random, forming a “small France.” The members are 52% of females and 48% of males; they are unemployed, students, workers, retired, from 16 to 80 years old with all levels of diplomas, and from all France (from rural, urban areas, and overseas territories as well).

The representation of the diversity of French citizens in the panel will serve the legitimacy of the conclusions the CCC’s members will submit. To strengthen the credibility of the project, the Economic, Social, and Environmental Council (EESC), a constitutionally independent institution, and three guarantors mainly oversee the neutrality and sincerity of the debates. Also, plenary sessions are streamed on CCC’s website. Amongst the 150 CCC members, nobody complained about being manipulated so far.

The CCC was initially supposed to end at the end of January, but its duration has been extended after the cancellation of the December session due to the national strike against the pension reform of the government, but also because CCC’s members expressed their wish to have more time and working sessions: there will finally be 7 of them. 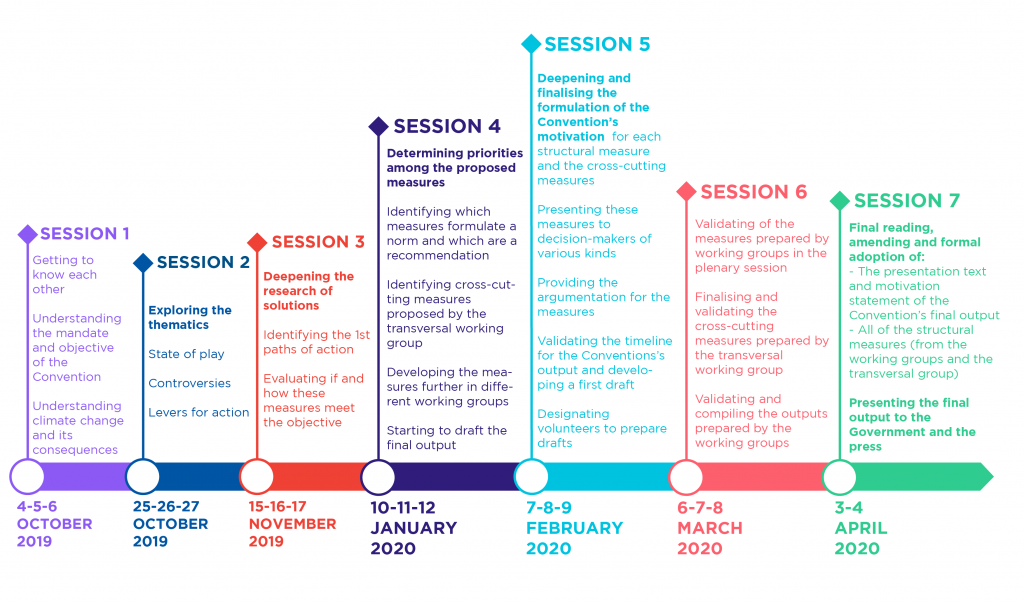 The 5th working session took place two weeks ago (February 07th to 09, 2020). CCC’s members debated on a revision of the constitution of the French Republic to include tackling climate change and protecting the environment in Article 1. They also voted the funding principles they are supporting to implement the ecological transition: by closing off tax loopholes and by public borrowing.

Thus, sharing the constraints of public action to a representative panel of citizens has the potential to help to accelerate the pace of climate change mitigation by making it socially acceptable.